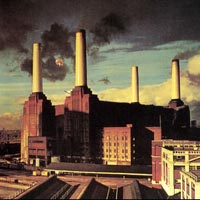 I just read the review on this page about the album, "ANIMALS", by PINK FLOYD. Although I agree with the reviewer that this was, perhaps, the single best album they ever created, I get the sense that he missed the point of the story because he totally dismisses the songs, "PIGS ON THE WING" parts one and two, as meaningless love songs that he doesn't care about and, yet, they are the key to the whole significance of "ANIMALS".

Waters, the master of understatement, saying so much with so few words, is at the top of his form here by leading into, and out of, "ANIMALS" with this little song which is, in fact, so much more than a simple, insignificant "love-song". It drives home the importance of caring for each other on a genuine, human level, the act of which, the demise is so clearly pointed to in every other song on the album. How this was lost on the afore mentioned reviewer baffles me beyond words.

He also states that he thinks it is sad that Waters took the lead on this album because, in his opinion, Gilmore is such a better musician. He, apparently, fails to recognize that this album-- IS "Waters"-- to the core. Without Waters, this album never exists. He should realize that "Waters" was responsible for all of "Pink Floyd's" best material and they were just never the same after his departure.

This album is, without doubt, one of the greatest, true concept-albums ever composed. While all the members made valuable musical contributions, I think it's important to recognize that this album is the "brain-child" of Roger Waters. I also think that to dismiss "PIGS ON THE WING" as a meaningless "love song" that you don't care about, is to dismiss the point of the album as a whole.