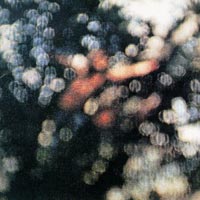 Obscured by Clouds is a rather underated album by Pink Floyd, while at the same time being nothing but a mediocre release. The Album starts off with title track, which I find to be very boring, as it is pretty much the same thing throughout the whole song, and it doesn't even sound good at the beginning.

However to be fair, it does move into a pretty good riff on the second song "When You're In", but even this riff is too repetitive. However, It doesn't last that long and its not so bad for the short while it is playing.

The next song on the album, Burning Bridges, you can hear the talent they proved that they had with Meddle. The lyrics are pretty good, the music sets a good pace and it is a very relaxing enjoyable song. However, I don't see where any of this music fits into a sound track as it was recorded for.

"The golds its in the ..." starts off really good, the music is pretty catchy and the lyrics are good. You can see that Roger and Dave did a good job working together on this one. Roger's base line even sounds good on this one. Drums are consistent and sound better than they have up to this point on the album. The guitar solo is nice piece of work, not to be overlooked at all.

Wot's uh the deal, speed up slow down, my biggest complaint with this album is that the timing is always changing. And this is another good song, but after a song like "The gold its in the .." it just doesn't seem to fit in this part of the album to me, but it is really a good song and probably one of the most underated PF songs. You can definently hear Wright in this song.

Now we go onto a rather interesting instrumental, it keeps the timing at the beginning of the song, and seems to fit in after Wot's uh the deal finally relaxes you again. Mudmen is a mild tempered song, then the guitar kicks in and it keeps the pace, but it completely changes the sound of the song. Wright sounds real good on the keyboards. Gilmour is steady as always, and well I often wonder if Roger is even here in this song to be honest, because you can barely him.

The next song, Childhood's End, I find a little hard to believe that Gilmour wrote it all by himself, since the lyrics are pretty good and the music is good as always when Gilmour is involved. It does seem to fit after Mudmen also, the guitar is good, the bass is good, the drums are good, and when you can hear Rick back there, he sounds good. I don't think it's the best song on the album as quite a few polls have returned, but the guitar solo is superb. Nothing real difficult but it fits in the song.

Free Four really throws off the timing, beat, and feel of the album. This albums seems to be a compilation of stuff they had written before and just couldn't fit on another album. Free Four is actually a good song and the lyrics do beat those of Childhood's End, but musically it is much weaker than Childhood's End. The guitar solo is nothing but the best though throughout the rest of the song it is absolutely boring.

Stay is a decent song, but I think it is a little depressing and monotonous. It's not something I would brag about being a pink floyd fan over that for sure, but at the same time, I'm not really embarassed about it either, I'm sort of indifferent.

Absolutely Curtains absolutely makes me sick, I like it even less than I do Seamus and I despise seamus with a passion. Those two Pink Floyd songs have to rate up in the 5 worst Floyd songs ever written.

I think the album is certainly worth the price that is paid for it, and it should go into any true pink floyd fan's collection, but I wouldn't go out and try to sell Pink Fan based on the album either. I would rate it at a 6 of 10.