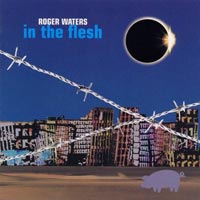 Scotland's The Herald reports on a play about Syd Barrett premiering in October in Glasgow. One Thinks of It All As a Dream, commissioned by the Scottish Mental Health Arts and Film Festival and written by Alan Bissett, will focus on "the influences and pressures on his mind and music" and not explicitly on his drug use, although it seems that would have to be a component of it. Still, it seems that Bissett hopes to examine Syd the person in more complexity and look beyond the famous (or infamous) "madcap" narrative, which should be interesting to any fan of early Floyd works.

"Amused to Death" 2015 edition out today

The updated 2015 edition of the excellent Roger Waters solo album from 1992, Amused to Death, has been released today. Aside from updated artwork, the CD/Blu-ray release also includes an updated 5.1 surround mix by longtime producer/engineer James Guthrie. As part of the release, an interesting series of videos of Roger discussing the album and each track have also been released.

David Gilmour has announced a new album, Rattle That Lock, out September 18, a new single by the same name out July 17, and a small North American tour in the spring. Tickets for the concerts in Los Angeles, Toronto, Chicago, and New York City go on sale tomorrow at noon local on Ticketmaster's site; meanwhile, his official site has more information on the new material.

Tickets available for screenings of The Wall concert film

Tickets have gone on sale for US screenings of Roger Waters's The Wall concert film on September 29, including a post-film Q&A with Roger Waters and Nick Mason. This The Simple Facts session will feature questions submitted by fans, although it's currently unclear how the questions will be collected. The tickets are available at the Fathom Events site.

Ça Ira and the Nashville Symphony

On his official Facebook page, Roger Waters announced a concert performance of his opera, Ça Ira, premiering January 30. Waters himself will take part in the performance, making it an an exciting chance to see him for fans of his work with Pink Floyd or as a solo artist.