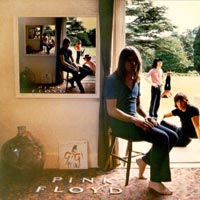 Track Listing
1.  Astronomy Domine (live)
2.  Careful With That Axe, Eugene (live)
3.  Set the Controls for the Heart of The Sun (live)
4.  A Saucerful of Secrets (live)
5.  Sysyphus
6.  Grantchester Meadows
7.  Several Species of Small Furry Animals Gathered Together in a Cave and Grooving With a Pict
8.  The Narrow Way
9.  The Grand Vizier's Garden Party

Reviews
by Patrick
by William Egarr

At their peak of their most psychedelic musical experimentation comes my favorite Pink Floyd album: Ummagumma. It represents the talents both technical and artistic of all the band's members. Long before they were plagued and influenced by massive popularity and unmatched success, Pink Floyd's members put together an album that really seems to reach out to the listeners and strike real emotion.

The first four tracks make up Rick's contribution: Sysyphus. I can Remember the first time I listened to the album, and my immediate attraction to the dark opening melody of this song. Ummagumma being one of the few Floyd albums that doesn't begin with silence, the powerful beginning takes the listener off guard. In a slight state of shock, and mildly unsettled the listener regains composure as the song decrescendos into the slow and mellow parts 2 through 4. And while the first time I heard these I must admit I was bored, now Sysyphus is arguably the best work of the 4 artists on the album. Wright's melodies are flowing and beautiful, then destructive and unsettling, yet at the same time blending together as if they belong that way.

Next on the album is Roger's contribution, Grantchester Meadows and The Furry Creatures song. Where as Granchester Meadows is probably one of if not the best of Roger's early work, The Furry Creatures song is probably hard for most people to find enjoyable unless they really put effort or trying to interpret the work. After a somewhat dramatic and full sounding conclusion of Richard's song, the quiet chirps of birds puts one's mind at ease. Following this is an acoustic melody that can't be described as anything less than beautiful. When the singing begins, once again the listener is slightly disturbed by the unsettling lyrics. This mix of a simple beautiful melody and seemingly dark and meaningful lyrics really sum up Roger's song writing ability. This is followed by an odd track, made mostly of odd tape effects and a narration by a Scotsman, which I believe is a battle involving the Picts.

The silence is then interrupted by a crescendo of noise, which in turn eventually breaks into the long enjoyable acoustic melodies of Dave's The Narrow Way. More up beat and rhythmic than Granchester Meadows, Dave plays what I consider to be his best early work. This opening is plagued by odd, almost scary tape effects, which in the end seem to "take over the song." This noise transforms into a riff which cries out in the same fashion of the 1st part of Sysyphus. The repeated riff fades slowly, and we are left with only the psychedelic tape effects. Soon, however, the song moves on to part 3, the second track with vocal accompaniment. This is a catchy tune (part 3), but sometimes I think it drags out for too long.

Lastly is Nick's addition. The Grand Vizier's Garden Party, as it's called, is basically a long drum solo. It begins and ends with an eerie flute melody, which leads into tymphanies being detuned, and snare rolls, etc... There are melodies that seem to be some of Rick's playing towards the beginning intertwined with the soloing, which I feel add a great deal to the piece. Then the piece slowly builds while Nick bangs on an assortment of percussion equipment. Overall, I feel the material is quite enjoyable, however, once again you have to be willing to open your mind to it.

The studio album shows what each artist was capable of as an individual during the maturing of the group as a whole. I believe that it gives a great portrait of each member as a soloing artist. It is this individual soloing which then allowed the band to create long masterpieces (Atom Heart Mother etc.) where playing together and understanding each other musically is so important. Ummagumma is definitely an important piece of the puzzle of Pink Floyd, both as a building block and as a work of art everyone can enjoy.

I'm not going to comment on the live album, because none of the material on it is from the Ummagumma studio album. I don't really feel the material is "Ummagumma material." It's just a live concert of earlier stuff put on the Ummagumma album. I will however say that I do enjoy all 4 songs, and consider the recordings to be improvements on the studio cuts.