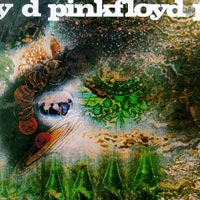 A Saucerful of Secrets Album Review

This is probably Pink Floyd's absolute most underrated album by fans and critics alike. The first song "Let There Be More Light" gives the album a great start with its repetitive guitar riff completely disappearing within one minute of the song and getting the song started. The song is great, almost hypnotic depending where and how you are listening to it.

The next song "Remember a day" is written and sung by Rick Wright and is about childhood. It is a very beautiful piece and is easily one of the best early Floyd tracks. "Set the Controls for the Heart of the Sun" is a very slow song built around a bass riff. It isn't the most accessible song, but if you give it time it will really grow on you. "Corporal Clegg" is a truly excellent song, probably Pink Floyd's hardest-rocking song to that point. It is very similar to "The Wall" and "The Final Cut" because of it's anti-war lyrics, but it is also far more lighthearted than either of those albums. The title track is a truly bizarre piece with multiple parts, and is like "Interstellar Overdrive" because it is a free form instrumental, but ASOS is far darker and complex. I really hated ASOS (the song) when I first heard it, mainly because it was so overwhelming, but it has really grown on me and I haven't been able to get enough of it lately. The sixth track, "See-Saw" is written by Rick Wright and is thematically and sonically similar to "Remember a Day" , and is THE most underrated song on this album. The final track "Jugband Blues" is Syd Barrett's sole contribution to the album (besides some playing on "Set the Controls for the Heart of the Sun") and is a sad, crazy song with an entire band playing random notes and Syd just strumming the guitar at the end, singing sad and heartfelt lyrics. Overall, this is an EXTREMELY good album and probably would not be enjoyed by the casual listener; but if you have patience or just love Pink Floyd and good music as a whole, this album is a must.