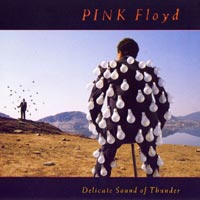 After the big split in the group, Pink Floyd without Waters made a pretty bad album, A Momentary Lapse of Reason. Generally, the album wasn't so terrible, but it came as a disappointment for the hard core fans ( probably cos it was too poppy ). Delicate Sound of Thunder, a double live album, came out the next year, and it made the image of the post Waters Floyd look much better.

The first CD opens with Shine on You Crazy Diamond. This song is done correctly and there isn't much to talk about here. All the other songs are from A Momentary Lapse of Reason: Learning to Fly, Yet another Movie, Round & Round, Sorrow, Dogs of War and On the Turning Away. It's interesting that these songs sound much better then the original; that's why many people think of Delicate Sound of Thunder as an improved version of A Momentary Lapse of Reason. For example: Sorrow lost that annoying eighties-style drums, but has kept strong, rough guitars ( it ends like it starts - with great guitar riffs ). Learning to Fly sounds like world music now, and On the Turning Away has longer guitar solo.

The first four songs on the second CD are One of These Days, Time, Wish You Were Here and Us&Them. These songs aren't much different then the originals, except for a slightly different guitar ( Time ) and sax ( Us&Them ) solo. Money, the fifth song, is much longer then the original; it also has that who-oh sound, produced by the backing vocals, which many Floyd fans find annoying (so do I ). The last three songs are from The Wall: Another Brick in the Wall ( part II ), Comfortably Numb and Run Like Hell. Another Brick sounds rather weak and is much worse then the original. But the Comfortably Numb is fantastic; instead of weak bass it starts with the kick-ass guitar riffs, which is great, but has lost the touchy violins. It ends with a never-ending guitar solo - one of the best moments of the album. Many fans consider this live version better then the original; I think that the best solution would be a combination between rough guitar and beautiful violins. And finally, Run Like Hell; live version is very long, mainly because of Gilmour's guitar exhibitions, and it also sounds better then the original, but without it's strong irony. It became Gilmour's guitar polygon.

The question is, should you buy this album or some other live album ( Pulse ). Delicate Sound of Thunder was my first Pink Floyd album, and I really love it; compared to Pulse it sounds much more fresh and interesting. It also has improved songs from A Momentary Lapse of Reason, so I think that this album is a much better solution. Get it, at least for Comfortably Numb.