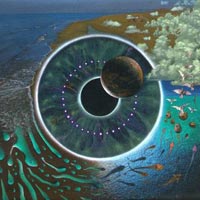 In 1995, one year after they released their successful and highly acclaimed studio album The Division Bell, Pink Floyd once again returned to the forefront of the music scene with Pulse, a marvelous, fascinating, and definitive live double-LP. The first disc contains live performances of their biggest hits while also focusing on some of the new material from The Division Bell. Highlights include "Learning To Fly", "Another Brick In The Wall, Part II", "High Hopes", and "Shine On You Crazy Diamond". The second disc is a complete live performance of their masterpiece album The Dark Side Of The Moon, with encores "Wish You Were Here", "Comfortably Numb", and finally a wonderful, raucous performance of "Run Like Hell" which closes Pulse. Caution: if you play the end of "Run Like Hell" loud enough, the bass of the closing drum beat could very easily blow your speakers! As far as the music performed on Pulse, Pink Floyd has once again reminded us of how masterful they are as a live band, and how they very easily hold their own sans Roger Waters. As are their previous albums, Pulse is fascinating not only in its musical content but also in its cover artwork and the symbolism thereof, which serves to enhance our enjoyment and understanding of the music contained in the album. The beautiful cover seems to depict a continuous cycle of ocean, land, and sky, with a dark spherical circular void in the center of the album surrounded by thunderous, chaotic turbulence. If you look closely in the chaos surrounding the void, you can faintly spot a series of gears of some sort, as well as a bicycle The bike could very well represent the bicycle seen in the tornado in The Wizard Of Oz. Remember the mysterious synchronicities found between that film and Dark Side Of The Moon? There is also a rusty-looking ball that seems to be closing the void but is a bit off center. The earthly cycle, along with the ball closing the void, seems to recall a famous lyric echoing from Pink Floyd's past: "Everything under the sun is in tune, but the sun is eclipsed by the moon..."