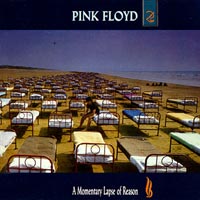 Four years after the last Pink Floyd album ( The Final Cut 1983) and the departure of Roger Waters, I didn't know what to expect from David Gilmour and the rest of The Floyd. I must say, they did surprize me and in good ways.

I will start off with the albums opener "Signs Of Life". This song is composed of mostly keyboards, and David's bluesy guitar playing. This is a track that you may skip over the first few times but when you really sit down and listen to it, it will be become very rewarding to your ears. David's playing and the keyboards really make a great opener.

"Learning To Fly", the first single released is a masterpiece. The melody is so catchy, many floyd fans may think it is too poppy. This is perhaps Pink Floyd's most perfect track since Roger Waters in the early Pink Floyd. Although many will think this song is too radiofriendly, nonetheless, this is one of the finest songs ever produced by the Floyd.

The third track " Dogs Of War" is a more unusual Floyd song. It sounds more like other 80's bands than Floyd. The music is good, but lacks in some places. It sounds like Gilmour wanted to put a blues jam song on the album. The very raw sound is also not helped by some of Gilmours not so great lyrics. They aren't terrible, but Gilmour sounds like he didn't give much thought to this one. I do however like this song, but it wouldn't make my greatest hits tape.

"One Slip" is made up of a hip hop drum beat and great sounding earthy music. The Song starts off with a bang and never lets up. The lyrics about an unwanted pregancy are great too. This is one of the best songs on the album and it is my favorite.

The second single " On the Turning Away" is a pretty normal pink floyd song that sounds like something that could have been put on the wall ( 1979). This song has good points in the lyrics and the melody is very catchy. I didn't know David could sing so high until I heard this song. As like older Floyd songs, this song is ended with a long melodic guitar solo of Gilmours similar in style to "Comfortably Numb". This solo may not be as perfect ad Numb but will be apprieciated by guitarist worldwide. This has to be one of the few songs where David uses his whammy bar in a great ways.

"Yet Another Movie" which starts off with a pretty strange intro. Some Floyd fans may find it boring or lame but I thought it was a pretty good intro. The rest of the song like other songs on the album, has a real earthy sound to it. The guitar solos are good, and are not overlong. This song is followed by a real short song " Round And Around" which is hardly a song at all. This is the shortest song ever by the band and flows perfectly from the previous track.

A New Machine parts 1 and 2 are new kind of songs from the band. It is only constructed of Gilmour's vocals with strange but tastful vocal effects. This song is very short too. This sounds like Gilmour gets sometimes sick of living.

Terminal Frost which is perhaps my second favorite song, is simply an instrumental. This song at first did not shock me, but it grew on me. The melody sounds like a song you would listen to only at night. I really enjoyed the middle section with the saxiphone solo. This solo was the best I've heard since "Money". It sounds a little like Kenny G-ish, but fits the song perfect.

Sorrow, the final track opens with one of the best intros ever. I recently read the intro was recorded in a Stadium to achieve the reverb effect. I liked the intro, but the rest of the song doesn't really catch my ear. It lacks in melody throughout the song. The words are really good " A silence that speaks so much louder than words ", thoase are some of the best words I've ever heard from any band. But once again, that can't save the song from lack of melody. The outro solo is nothing to think much of either. It flows in the same boring key as the rest of the song, and I guess fits the song well, because a bad song usually has a bad solo.

With a few exceptions, this is one of the best Floyd albums ever. I will be listening to this one for years. Floyd fans who were dissapointed with A Final Cut will like how the floyd have proven that they still have some great tunes left to write.- Britt Burns